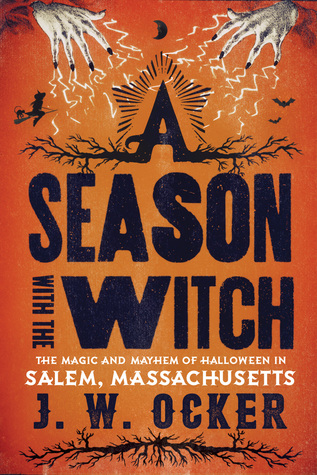 A Season with the Witch: The Magic and Mayhem of Halloween in Salem, Massachusetts by J.W. Ocker was a book I was really looking forward to reading for a variety of reasons; not least of which is the fact that I have been following his blog, OTIS,for a couple of years.

Ocker is one of those rare authors who is really good at the weekly grind of running an interesting blog and is also a legitimately good author. His last book did win an Edgar after all. The charm of Ocker’s blog is that it is part travelogue, part horror fan confessional, and that ethos carries over to his latest book as well. Because I follow him online I was able to see a behind the scenes version of A Season with the Witch as it was being written and I even interacted a bit with the author during the process. (Well, as much as social media counts as actual interaction. Allow me my tangential connection).

Ocker moved his family  to downtown Salem for a month to witness firsthand October in Salem, visiting all of its historical sites and attractions. He also interviewed a lot of the people involved in making Salem’s Haunted Happenings, well, happen. From its political and civic leaders to its entrepreneurs and visitors. He even talks to some honest-to-god witches in the process.

This was a quick and fun read made all the more enjoyable for me because I have been to Salem a few times myself. Many of the locations and events he describes are familiar to me and it is interesting seeing another person’s take on things. I particularly like the chapter on Hawthorne and not just because I have been to the House of Seven Gables. The universe aligned things just right and I was in the middle of that chapter right as I was teaching my students Hawthorne’s The Birthmark. Made for an interesting side lecture in one class.

But by far the most interesting parts of the book are the interviews. There are so many competing views about how Salem does October. Some love the exposure it gives their city. Some think it is rank commercialism, capitalizing on the city’s shameful past. And others just seem to want to put their heads down and soldier through the month until they can have their city back.

And due in no small part to Ocker’s treatment of his interviewees, I can sort of sympathize with all of them. That is what makes this book a great read.